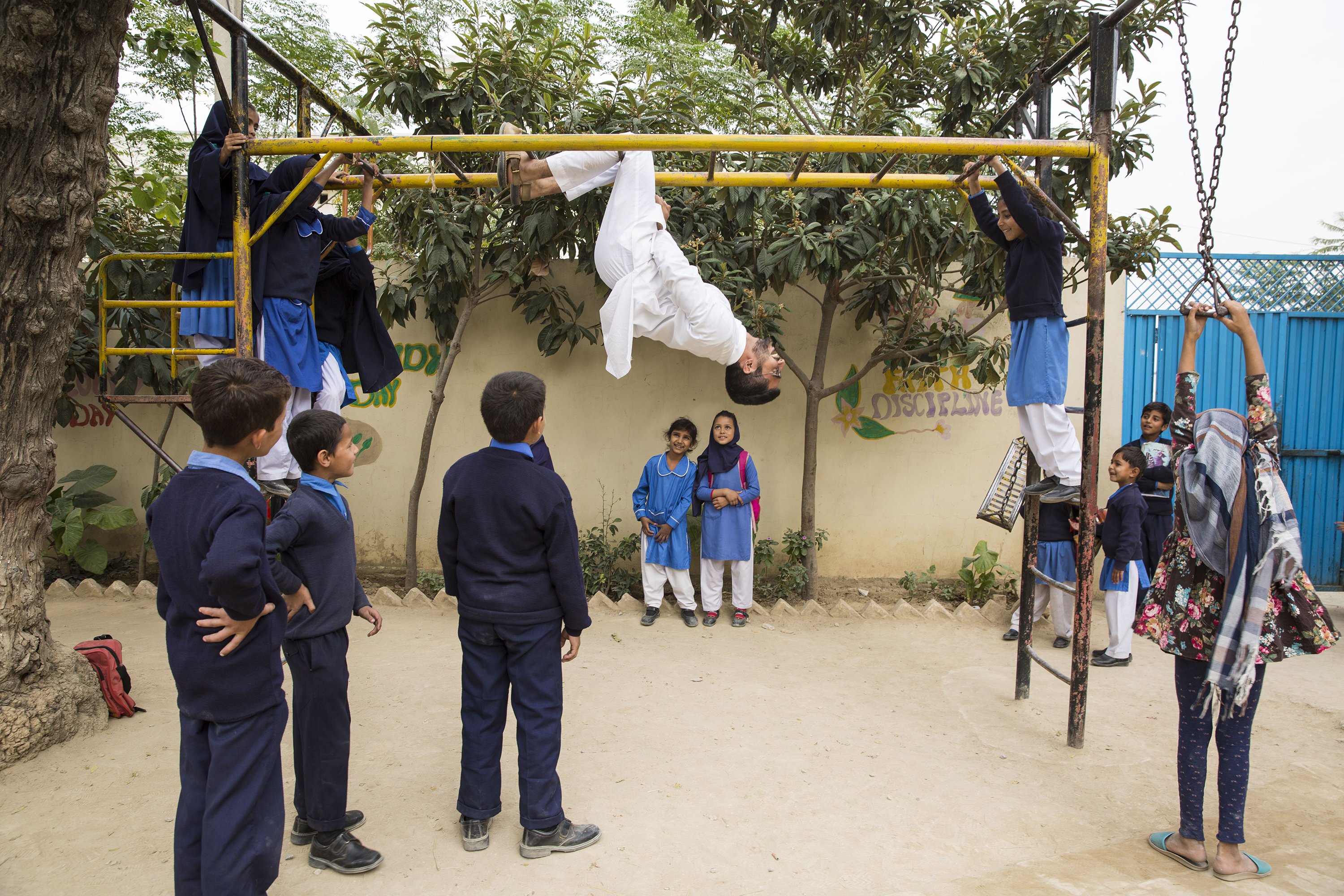 When educational entrepreneur Haroon Yasin prepared to attend college at Waterloo University, in Ontario, Canada, he realized he was leaving many of his friends in Pakistan behind.

Yasin grew up playing in the streets with children who lived in Islamabad slums and, without the opportunity to receive an education, they didn’t have much of a choice but to work low paying jobs that trapped them in cycles of poverty.

Yasin later dropped out of college and returned to Islamabad, where he encountered children picking garbage out of trash cans to earn money. This was a turning point for the teen, and it pushed him to dedicate his life to fight the notion that children who had been “born into the wrong household” shouldn’t receive a quality education. 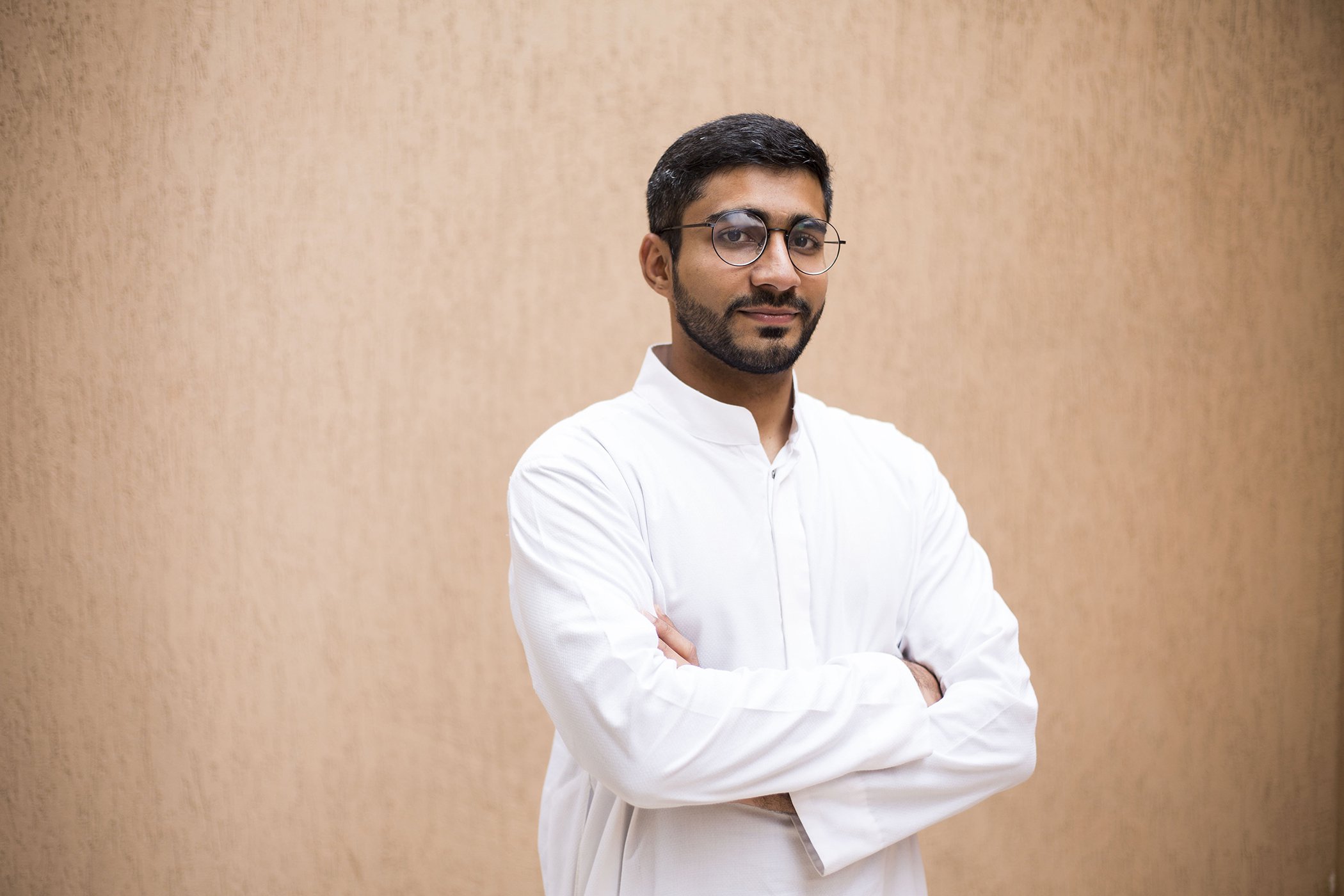 Haroon Yasin, co-founder and CEO of Orenda, an educational tech company that creates content for children, poses for a portrait at their office in Islamabad, Pakistan on Nov. 14, 2019.
Image: Saiyna Bashir for Global Citizen

By the age of 18, Yasin had opened and was running schools in slums for poor or homeless children who lived on the street. Eventually, Yasin completed a degree from Georgetown University in Qatar. In 2015, he co-founded the organization Orenda, and now the CEO is one of five young finalists in the running for the Global Citizen Prize: Cisco Youth Leadership Award.

Launched in 2018, the Cisco Youth Leadership Award celebrates and supports the work of incredible young activists around the world who have dedicated their lives to ending extreme poverty.

The award will be presented at the inaugural Global Citizen Prize award ceremony on Dec. 13 at London’s Royal Albert Hall, with the ceremony to be broadcast around the world later in December. The Cisco Youth Leadership Award winner will receive a life-changing $250,000 prize to help fund the organization through which they’re having an impact.

You can learn more about each of the finalists and cast a vote for the activist you want to see win here. Voting closes on Nov. 26 so hurry! Global Citizens in the UK will be automatically entered into a prize draw to win a pair of tickets — and travel and accommodation for one lucky winner — to the ceremony. 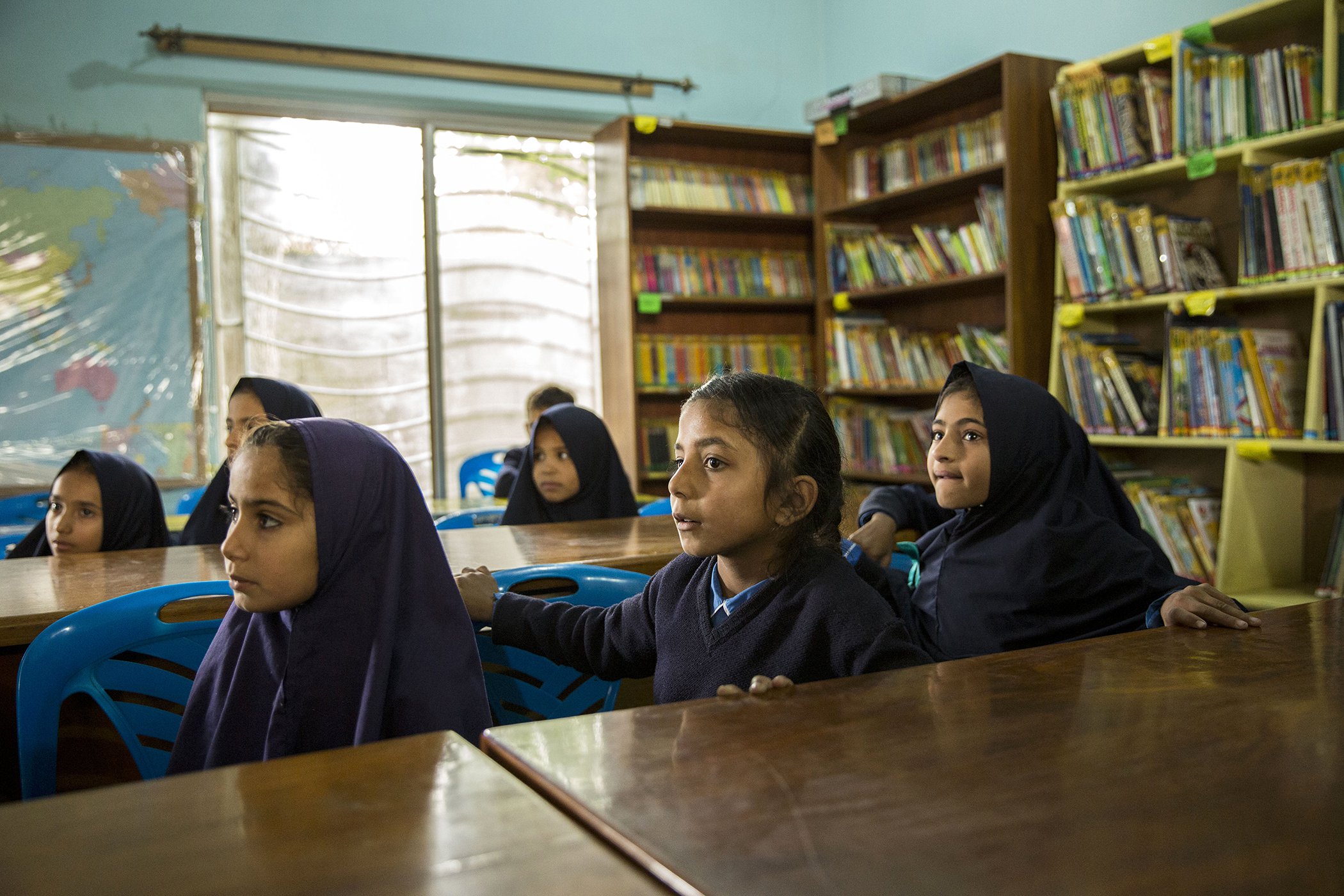 Children watch videos on the Taleembabad app at the Saya School in Islamabad, Pakistan on Nov. 14, 2019.
Image: Saiyna Bashir for Global Citizen

Through Orenda, Yasin is using education to help address the unfair boundaries that children face due to their family’s economic situation.

Orenda aims to bring innovative education access to underserved communities around the world that are difficult to reach. The organization is engaging students through its mobile app Taleemabad, with a “gamified, localized curriculum” that is individualized for each student and delivered through an adaptive platform.

Yasin is determined to make children fall in love with learning by making it fun. Orenda converts Pakistan’s national curriculum into an animated, digital format. First, students watch a cartoon video on Taleemabad and then they play a game that tests them on what they learned.

“If you’ve ever been a part of a classroom where there’s a teacher who walks in and you look forward to having that teacher in front of you every single day,” Yasin says, “that’s what Teleemabad does for 130,000 children all across Pakistan.”

As of 2018, 22.5 million children in Pakistan are not in school, making it home to the second-highest number of out-of-school children in the world — most of them girls.

The school dropout rate is 44% in primary school and 40% in secondary school, and according to the country’s education department, it’s due to poverty, lack of interest, and lack of schools. Even when children stay in public schools, they often cannot read a single sentence by fifth grade, according to Yasin. 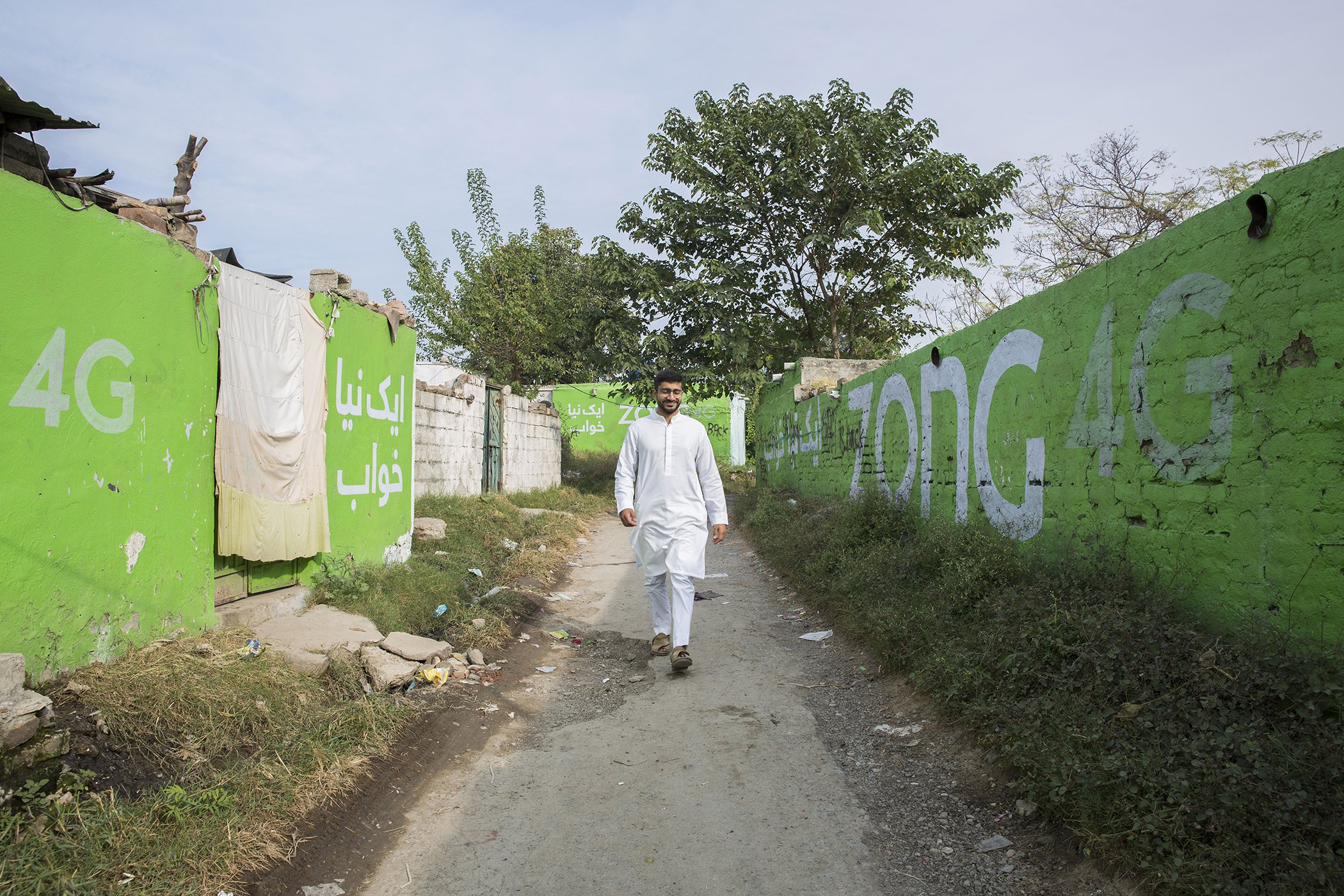 Haroon Yasin roams the streets of Bheka Saiyidaan, a slum where he built his first school, in Islamabad, Pakistan on Nov. 14, 2019.
Image: Saiyna Bashir for Global Citizen

Children who are homeless are especially vulnerable. An estimated 1.5 million children under the age of 18 live on the streets in Pakistan and according to one report by the Ministry of Human Rights, 70% of the children sampled who live in slums are out of school.

Children who are homeless are also at a high risk of sexual abuse, street violence, psychological trauma, drug addiction, and communicable diseases.

“I spent a large part of the last eight years traveling the slums and villages all across Pakistan, feeling that education has to change,” Yasin said.  “It must change to build the next generation of leaders.”

Some of the most underperforming government schools in remote areas across Pakistan are testing Taleemabad and seeing results.

The app has been found to reduce dropouts by 70%, according to Yasin. Children who start using the app notice performance improvements up to 50% within two weeks.

Children in non-traditional learning environments who use Taleemabad are also thriving, he adds.

Yasin describes how one cancer hospital had noticed that children who started receiving chemotherapy often had to drop out of school.

But when a child who was admitted to the hospital introduced their peers to Taleemabad, Yasin says, the app spread throughout the entire ward. Now there’s a special Taleemabad room within the hospital where children go every night to watch educational cartoons. When the children return to school, he adds, they jump ahead in class. 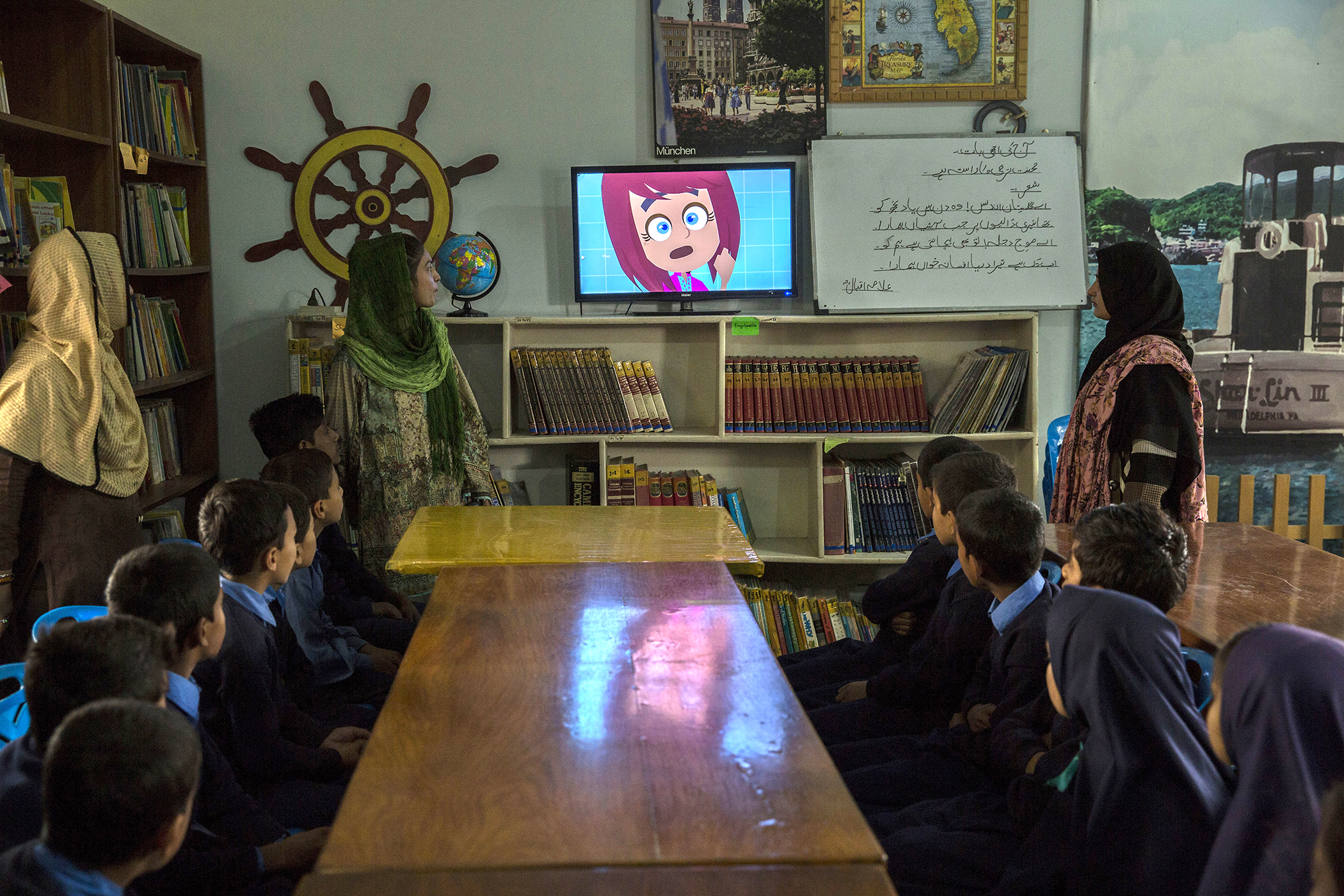 Children watch videos on the Taleembabad app created by Orenda, at the Saya School in Islamabad, Pakistan on Nov. 14, 2019.
Saiyna Bashir for Global Citizen 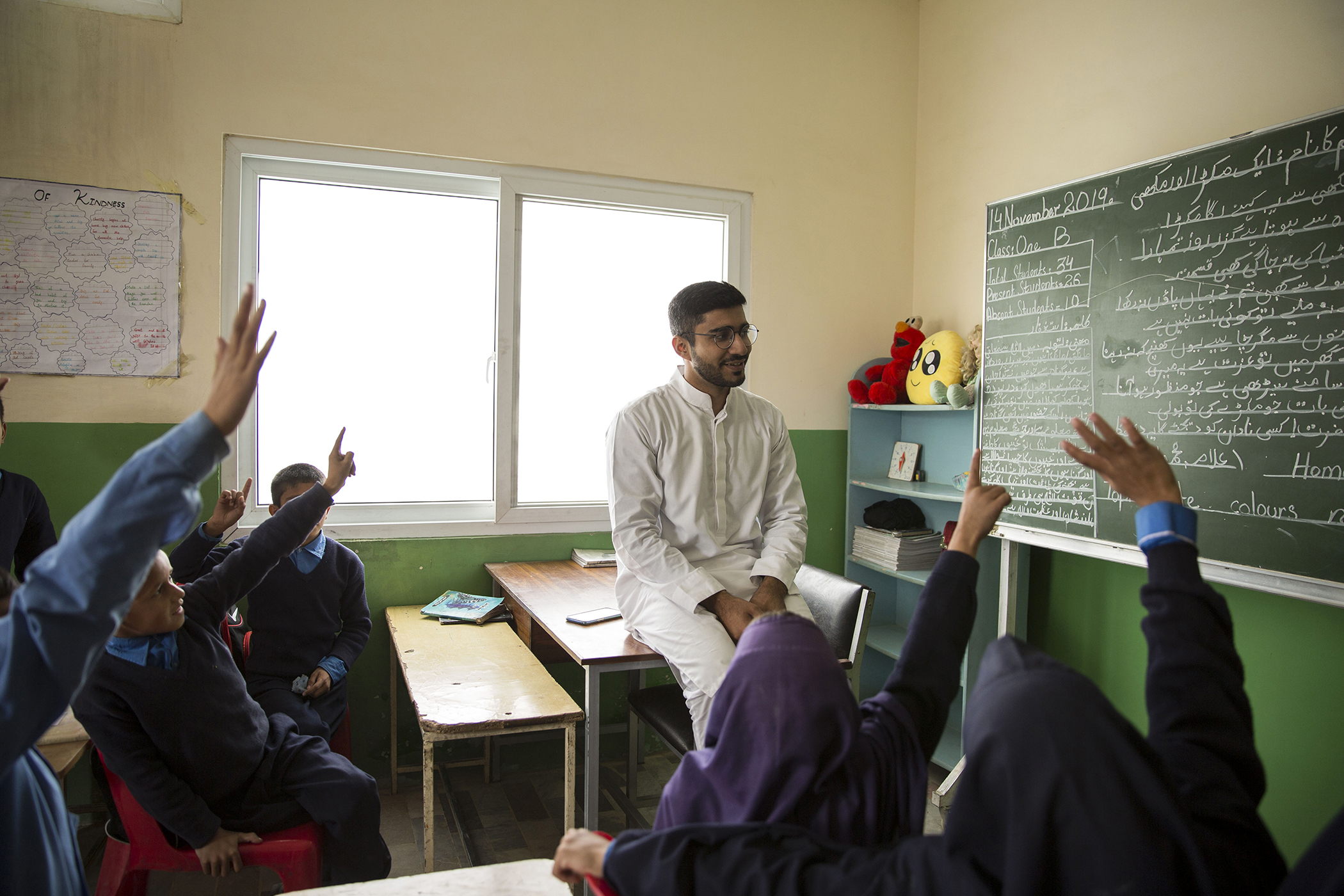 Haroon Yasin teaches lessons to children from the Taleemabad app at the Saya School in Islamabad, Pakistan on Nov. 14, 2019.
Saiyna Bashir for Global Citizen 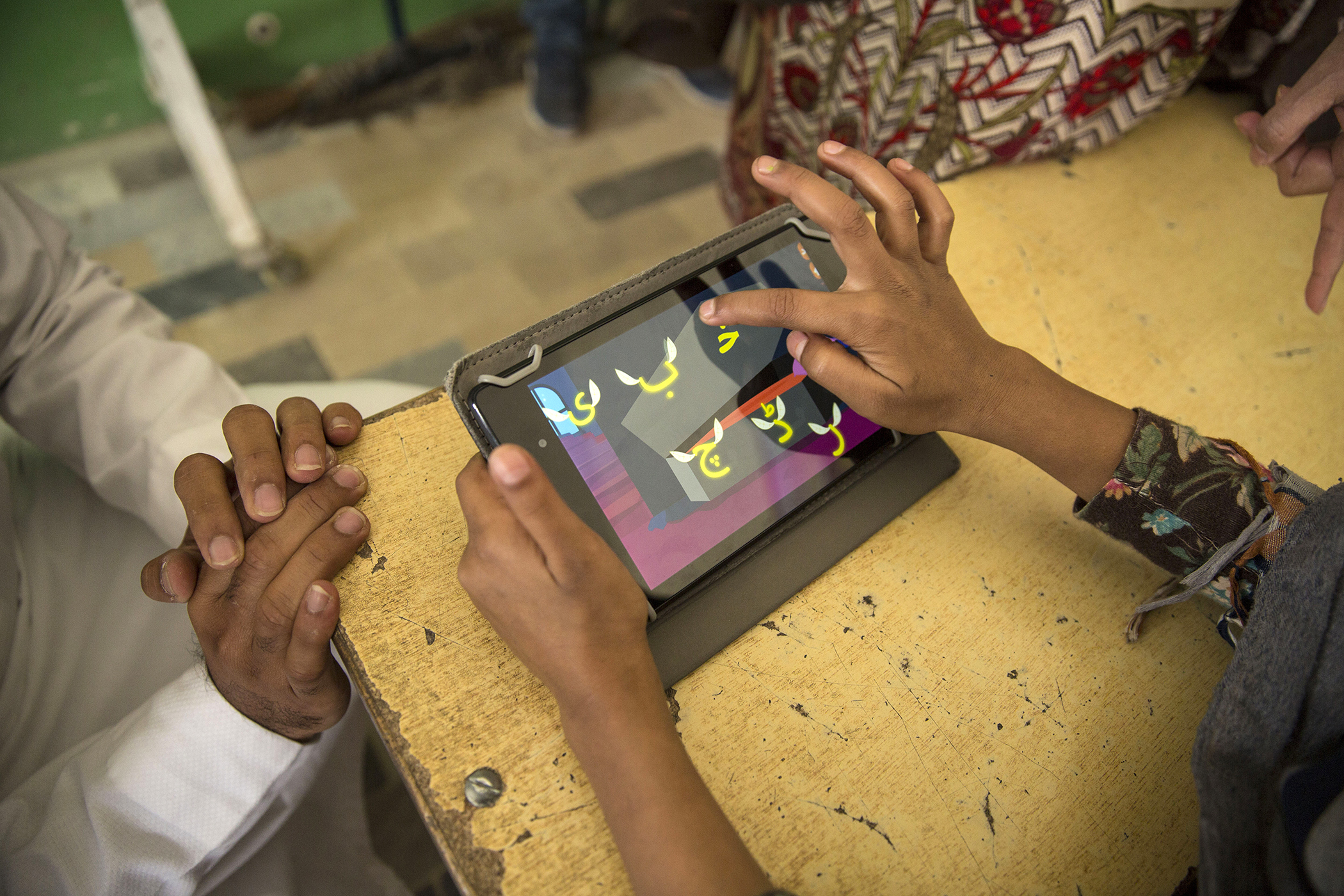 Haroon Yasin helps a student with the Taleemabad app at the Saya School in Islamabad, Pakistan on Nov. 14, 2019.
Saiyna Bashir for Global Citizen

Orenda’s mobile app Taleemabad is expected to reach 1 million children across multiple countries in the upcoming years, and has already earned recognition from education advocates Queen Elizabeth II of the UK, and Nobel Laureate Malala Yousafzai.

If Yasin wins the Global Citizen Prize: Cisco Youth Leadership Award, he hopes to expand Taleemabad to have a global reach beyond the slums and make the app even more specialized for each unique child.

“I want every underserved child to have the opportunity of world-class education at their fingertips, regardless of their ability to pay,” Yasin said. “Regardless of where they are born and which religion they belong to, what socio-economic strata they belong to.”

Haroon Yasin plays with students at the Saya School in Islamabad, Pakistan on Nov. 14, 2019.
Image: Saiyna Bashir for Global Citizen